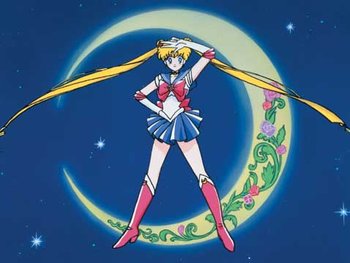 "I am the Pretty Guardian who fights for love and for justice! I am Sailor Moon! And now, in the name of the Moon, I will punish you!"
Advertisement:

Known in Japan as Bishoujo Senshi Sailor Moon (and given the non-literal English title of Pretty Guardian Sailor Moon), Sailor Moon is a multimedia franchise that fused the Sentai and Magical Girl genres. The series started as a manga written by Naoko Takeuchi that was serialized in Nakayoshi. When Toei approached Takeuchi with a request to adapt it into an anime, Takeuchi thought the concept would work better as a show about a team and thus created the Sailor Moon manga which was serialized in Nakayoshi between 1991 and 1997 and received an anime adaption that ran alongside it. Due to the manga and anime being made at the same time and written by different people, the original 90's anime is only partially based on the manga. The series follows the adventures of a young schoolgirl Usagi Tsukino, who turns out to be the reincarnation of the titular ancient lunar warrior from the Moon Kingdom. The manga was soon adapted into one of the most popular anime productions ever made. Sailor Moon lasted for five seasons, three motion pictures, and a number of TV specials, becoming its own cottage industry in the process.

Statler: So nice our planet sends those nice young sailors to guard life on other planets, right Waldorf?
Waldorf: Why do you care, they won't guard your life on this planet!
Both: Do-ho-ho-ho-hoh!

Crescent Beam to the face

Crescent Beam to the face