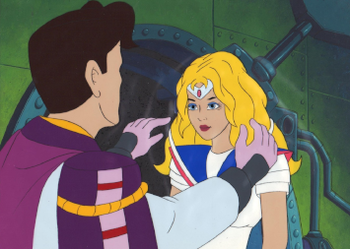 During the time Toei Animation shopped the rights to the Sailor Moon anime around in North America, it received a pitch from Toon Makers and Renaissance Atlantic (the same company that handled the adaptations of Super Sentai into Power Rangers for Saban Entertainment). This pitch, dubbed "Saban Moon" by fans note (although Saban actually had no involvement with it whatsoever), turned out even less faithful to the source material than the much-maligned DiC dub. As much as the latter was maligned, most every fan agrees it was better than this option.

It also (obviously) never got picked up, so what little anyone knows about this pitch comes from a two-minute music video

that features footage from a 17-minute pilot episode (which, as of this writing, has never seen the light of day), an interview

with Rocky Solotoff, the pilot's director and producer, several scripts

that turned up in late 2012, and an unofficial 2022 documentary, The Western World of Sailor Moon

. This version would have seen the civilian lives of the Sailor Senshi(/Soldiers/Scouts/Guardians) (referred to in this version as the "Princess Fighters") filmed in live-action segments that featured an ethnically- and disability-diverse cast (the pilot made Sailor Jupiter black, Sailor Venus either Latino or Mediterranean, and Sailor Mercury a wheelchair user).

The only footage of this pilot in circulation came from a panel at an anime convention; this low-quality shaky-cam footage also recorded the reactions of the convention's audience. A version with the perspective corrected

exists, as does a slightly longer version

which contains some of the preamble from panel host Allen Hasting (the author of the computer graphics software package Lightwave 3D who claims to have designed the vehicles, even though Rocky Solotoff said he didn't use Lightwave and a completely different person designed the vehicles). Not much else was known about the pilot until late 2012 when cels and copies of the animated portion's shooting script suddenly started appearing on eBay after the storage locker of a former Toon Makers executive was repossessed. For the first time, the characters' names and the plot were actually known, though much remains unknown (such as how the live-action segments would have been worked into the plot or much of the production's cast and crew outside of a handful of names confirmed by the producers themselves).

Don't confuse this with Pretty Guardian Sailor Moon, the live-action series made in Japan.