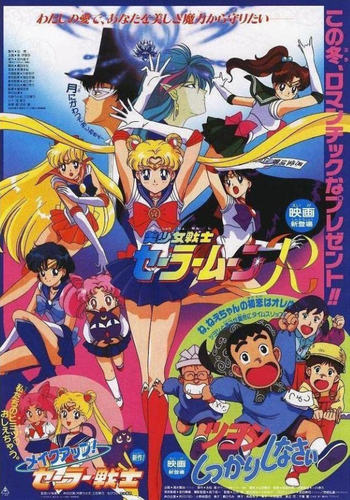 Sailor Moon R: The Movie (initially released in North America with the subtitle, The Promise of the Rose) is the first Sailor Moon film. It was originally released in Japan on December 5, 1993, between episodes 75 and 76, with it being released along with a film based on the Tsuyoshi Shikkari Shinasai series. It was then dubbed into English by the Canadian company Optimum Productions in 2000 for Pioneer Entertainment, using most of the cast from their dub of the TV series. By late 2016, Viz Media re-dubbed the film using their own cast and premiered it in North American theaters in January 2017.

The story focuses on Fiore, an alien and Childhood Friend of Mamoru's who returns to Earth to reunite with Mamoru and give him a flower worthy of the one that Mamoru gave him. However, the Xenian Flower decides to bring about Earth’s destruction and to do this, she’s using Fiore as an Unwitting Pawn. The Sailor Guardians must stop Fiore's plans before it's too late.