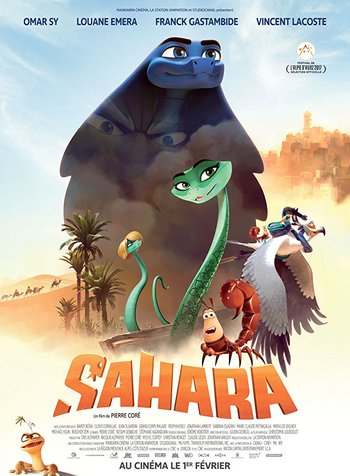 You guessed it, the setting of this film is that desert.
Advertisement:

A 2017 French-Canadian animated film co-produced by StudioCanal and Mandarin Films and directed by Pierre Coré.

It revolves around a blue snake named Ajar and his scorpion buddy Pitt. Constantly harassed and ridiculed by the other members of the Dusty clan, Ajar and Pitt soon learn that they have no one but each other to rely on.

While seeking out a more suitable place to call home, the dynamic duo get into quite a bit of trouble. They then find themselves on a rescue mission that takes them across the hot and hostile Sahara, a desert inhabited by friends, not to mention foes, of many shapes and sizes.

Not to be confused with the live-action film Sahara (2005), which also has a hero named Pitt.