All spoilers for Sailor Moon Crystal will remain unmarked. You Have Been Warned! 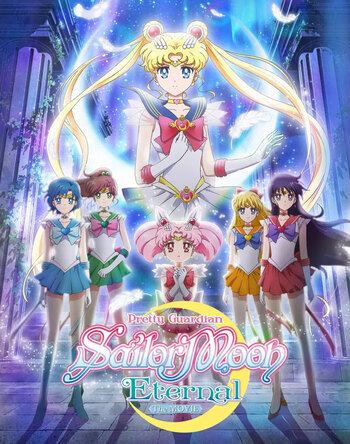 Beautiful dreams will be eternal.note From left to right: Sailor Mercury, Sailor Jupiter, Sailor Chibi Moon, Sailor Venus, and Sailor Mars. In the background: Sailor Moon.
"In the name of the Moon, I, Sailor Moon, will punish you!"
— Sailor Moon
Advertisement:

Sailor Moon Eternal: The Movie is the two-part film sequel to Sailor Moon Crystal and the first canonical film in Naoko Takeuchi's Sailor Moon franchise as well as the fourth overall Sailor Moon film. Eternal is directed by Chiaki Kon, who returns after having directed the third season of Crystal and written by franchise newcomer Kazuyuki Fudeyasu. In a first for the franchise, Eternal is a co-production between Toei Animation and Studio DEEN. It also marks the return of character designer Kazuko Tadano to a Sailor Moon entry, coming 17 years after the conclusion of Sailor Moon R.

Six months after the events of Crystal, a solar eclipse blocks out the sun and a Pegasus known as Helios (Yoshitsugu Matsuoka) appears to Usagi Tsukino (Kotono Mitsuishi) and Chibi-Usa (Misato Fukuen), seeking out a chosen maiden who can help break the seal of the Golden Crystal and use it to save the land of Elysion. Meanwhile, a group known as the Dead Moon Circus, led by Queen Nehellenia (Nanao), make an uncanny appearance in Juban. Their goal is to scatter the nightmare Lemures across the world and obtain the Legendary Silver Crystal so they can rule the Earth and the Moon.

The first part of the Eternal duology was released on January 8, 2021, with the second part following on February 11. The films exclusively premiered worldwide on Netflix on June 3.

A two-part direct sequel, Sailor Moon Cosmos, will be released in 2023.