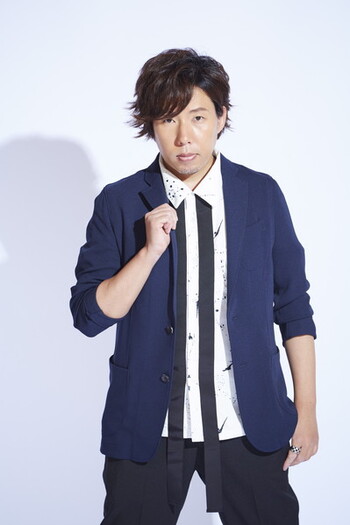 Satoshi Hino (born August 4, 1978 in San Francisco, California) is a US-born seiyuu, famous for voicing Unlucky Everydude and Ordinary High-School Student characters. Sometimes they might be more badass than though. Although being born in San Francisco, he does not speak English that fluently because he moved out to Japan when he was 5, as revealed in one of the The Familiar of Zero radio programs, in 2006. Then, when he was starting school, he found a dislike to the language because kids were so persistent about him 'talking in English' all the time because it was unusual in a kindergarten student. Now an adult, he really laments not having mastered the language. However, his English accent isn't half bad.

He is also a kendo fan.

Had a voice acting relationship with Rie Kugimiya, especially as lead guys like in Shakugan no Shana, The Familiar of Zero, and Nabari no Ou. (Gintama would have counted except that in there, they're like Cain and Abel). They voice the very same character in Saint Seiya: The Lost Canvas, a dream deity with a male form and a female form.

Seems to try and diversify his typecast nowadays, with some Vocal Evolution to boot; beforehand he's mostly on pretty boys or Ordinary High-School Student, nowadays he can also be your guy to voice a deep-voiced macho guy. For a similarly-typecast seiyuu in The New '10s, see Yoshitsugu Matsuoka. Has married Saki Nakajima in January 2015.