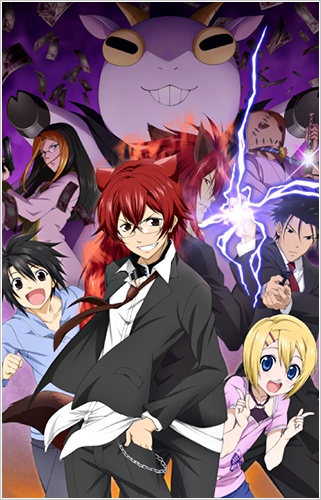 Cuticle Detective Inaba is a shounen manga by Mochi. An anime adaptation premiered in January 2013.

It's about Hiroshi Inaba an artificially-created being, formed by splicing the genes of both a human and a wolf, who gains information by tasting and examining people's hair, and pretty much has a hair fetish. He can transform into a more wolf-like form, and also gain special powers and perform different attacks depending on the type or color of hair he eats. Formerly employed by the police and partnered with an officer, he now runs his own private detective agency with the help of his sadistic, cross-dressing secretary Yuuta (often mistaken for a girl), and Kei (a *relatively* normal teenager working part-time at the office). Kuniharu Ogino, the officer formerly partnered with Hiroshi, also often helps out with cases. His arch-enemy is Don Valentino, an evil mastermind goat with a taste (literally) for money, and a variety of messed up but extremely devoted henchman, including gentleman samurai Lorenzo, who always wears a bag over his head and assassin Gabriella. Most chapters are individual stories revolving around Hiroshi and his friends trying to arrest the Don, always failing miserably.

Episodes are available for streaming at Crunchyroll