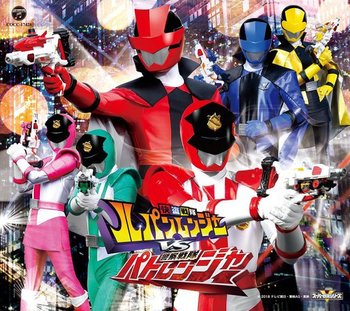 "Thieves and Cops: two teams that can never join forces are destined to clash!"
The Lupin Collection, a set of mysterious treasures gathered by the legendary phantom thief Arsène Lupin, has been stolen by the Ganglers!
"The phantom thieves who fight to recover what they've lost."
"The police force who fight to protect world peace."
Whose side are you on?!
Advertisement:

As the title implies, it is the first Super Sentai season to feature two distinctive teams. Despite this, both the Lupinragers and Patrangers are offically numbered as the 42nd Sentai, sometimes collectively known as the "VS Sentai".

Over a century ago, the infamous Phantom Thief Arsène Lupin stole a number of mysterious treasures which would come to be known as the "Lupin Collection". Rumor has it that if every item of the Lupin Collection is brought together, their combined power would be enough to destroy the planet.

When the Lupin Collection is stolen by an intergalactic gang of villains called the "Gangler", a young trio of aspiring phantom thieves decide to take up the name of the legendary rogue and steal the Collection right back as the anti-heroic "Lupinranger".

Yet they are not alone in their pursuit of the Lupin Collection! In response to the theft, the Global Special Police Organization (G.S.P.O.) put together their own elite task force called the "Patranger", whose mission is to arrest the Gangler and safely contain the Collection before their power can be misused to hurt innocent people.

With these two superhero teams on opposite sides of the law, a three-way race for the most valuable treasures in the world begins!