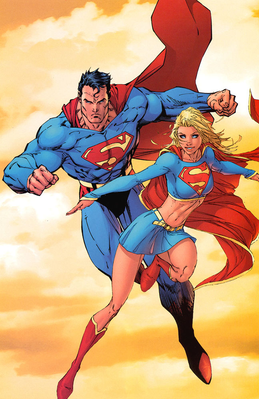 Superman and Supergirl.
Often, when a character has a Gender Flipped or Distaff Counterpart version, gender-specific changes will be made to that character's outfit. For example, pants will become a skirt, a necktie will become a scarf, and a vest will become a corset. Other popular, but relatively minor, changes include removing a collar for an Impossibly-Low Neckline or Absolute Cleavage, changing a unitard into a leotard (to show off sexy legs), or changing an outfit that was once loose-fitting into Sensual Spandex. Also, when the male version tends to be a Walking Shirtless Scene, the female counterpart will at least don a complimentary bra, to avoid Nipple and Dimed.
Advertisement:

However, male examples do exist. A tuxedo or a tie, for example. Or a baseball cap.

This is a subtrope of Distaff Counterpart and Spear Counterpart and often a manifestation of the Rule of Sexy. In video games, an Acceptable Break from Reality if the same clothing item is used.