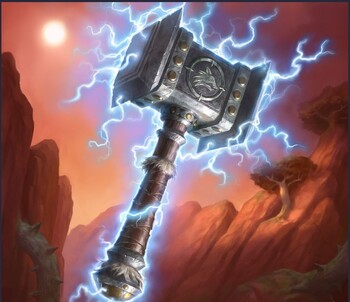 This is what powers the Horde!
Krakaboom
— Mjölnir, The Mighty Thor
Advertisement:

Likely inspired by how hammers make noises that could be compared to thunder, fiction frequently grants them the power to generate electricity or command storms. The sight of a hammer charged with electricity also falls under Rule of Cool so there's that. Designs usually range from a giant two-handed or a one-handed war hammer.

The Trope Maker is Mjölnir, the mystical hammer wielded by the Norse god Thor, associated with lightning to Thor's thunder, which means Mjölnir is what's lightning as it flashes through the air from Thor wielding it. Thunder Hammers are often either Mjölnir itself, named after it or is an Expy of the mythical hammer.