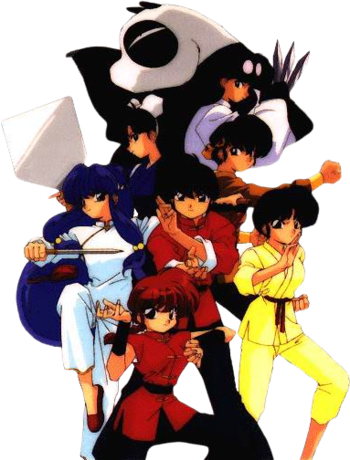 "Is that cute redhead the pigtailed kung-fu guy's twin sister?"Answer Nope: They're one and the same.
Advertisement:

Ranma ½ is Rumiko Takahashi's long-running Gender Bender martial arts/romantic comedy manga series, which was published in Shonen Sunday from 1987 to 1996. It received multiple Animated Adaptations, including two television series, three films and various OAVs, and a live-action movie in 2012. It's arguably one of the most popular, well-known, and influential manga properties of the 1990s.

Akane Tendō is a talented and tomboyish martial artist who discovers one day that her father has promised/sold her hand in marriage to Ranma Saotome, the son of a family friend and a martial arts prodigy in his own right. Akane bristles at the thought of being forced to marry someone she doesn't even know, and Ranma has his own problems to deal with. On a ridiculously ill-advised training journey with his father, Ranma accidentally fell into the cursed "Spring of Drowned Girl" and now his body transforms into that of a young girl when splashed with cold water. Hot water will reverse the transformation, but not before a case of mistaken identity gets Ranma and Akane's relationship off to the worst possible start.

Now Akane and Ranma have to put up with each other while an increasingly large snarl of characters try to woo, marry, and/or defeat one or both of them, sometimes simultaneously, often with world-class ability in bizarre or eclectic martial arts styles, and often bearing their own shapeshifting curses. Hilarity Ensues.

This series brought the "harem" trope to its ridiculous extreme; there's a reason that the Love Dodecahedron trope exists, and this series is that reason. The core cast numbered more than a dozen persons caught up in a complex web of love, hate, duty, honor, and rivalry – and Takahashi played all of it for laughs. More characters joined the madness every year, which eventually gave Ranma one of the largest ensemble casts in all of anime and manga. The manga ran in Shounen Sunday from 1987 to 1996, which were later published as thirty-eight tankoban and shinsoban volumes (which ended up condensed into thirty-six volumes for the American release).

Ranma ½'s TV series adaptation lasted seven seasons; it also spawned eleven OVAs, one theatrical short (released as the twelfth OVA outside Japan), and two motion pictures. Production ended when Kitty Studios folded in 1996. A belated thirteenth OVA was released in 2008 (along with special episodes of Inuyasha and Urusei Yatsura) as part of the Rumic World art exhibition that commemorated the 50th anniversary of Takahashi's publisher, Shogakukan.

While fans and critics alike consider the anime a "classic", it suffers from several problems. It rapidly Overtook the Manga and was canceled before it could complete the full storyline, ending three years before the manga itself concluded. The dearth of new material caused the show to become somewhat repetitious as the production team resorted to cookie-cutter filler episodes that had no relation to the manga's plot. (Of the final season's twenty-five episodes, only ten had storylines based on the manga.) This reflected a change in the manga itself, which had also abandoned an overarching plot in favor of smaller arcs and episodic comedy. The artistic quality of the show began to suffer noticeably early in its run – there is a visible decline in quality of animation, music, and writing starting in the second season – but around the fourth or fifth season, this tendency had begun to reverse itself to the point where the final seasons showed considerable improvement in the animation department. (The OVAs and movies had far better animation than the TV series, natch.)

Even with these problems, the Ranma ½ anime became a popular show in its day – even in North America. Ranma became one of the first major crossover hits that helped usher in the explosion of anime importation in the early-to-mid-1990s, and was the very first anime TV series to ever be released in English with a faithful, fully completed uncut dub.note The first uncut English dub was M&M Communications' dub of Mazinger Z in 1977, but only 30 episodes were dubbed. Many fans think of the dub by Viz Media and Ocean Studios, which premiered on November 2nd, 1993, as one of the first decent efforts in the history of English anime adaptation. Viz did its best to minimize the usual culprits of Cultural Translation, Bowdlerization, and localization – which contrasts heavily with the show's near-contemporary Sailor Moon (Viz released Ranma directly to video rather, whereas Sailor Moon arrived via television syndication, though Ranma also aired for a short time in some markets). It was even briefly optioned for a live-action Hollywood film in the late 1990s, although nothing ever came of it. Ranma had the fortunate luck to arrive in the the English language market at about the same time that the World Wide Web emerged into public life, which led to the show acquiring one of the first major online fan communities, the Fan Fiction Mailing List, or FFML, which primarily centered around Ranma despite the generic name, and the first known online scanlation effort, the RanmaScan project.

Despite its age, Ranma ½ still has a remarkably large and vigorous North American fan community – and it's still responsible for a significant fraction of the anime fanfiction on the web, including a wide variety of crossovers. Ranma ½ is probably one of the most crossed-over series on the Internet – on fanfiction.net alone, it has over 1,100 listed crossovers and hundreds (if not thousands) listed elsewhere. (That doesn't count unlisted crossovers, either there or elsewhere.) To put that into perspective: while Naruto has around eight times the number of crossovers listed, Naruto also has over twenty-four times as many stories listed as Ranma does total. One sub-type of Ranma fanfic – the Fuku Fic – became common enough that it has its own genre. The series' length and fanbase has predictably resulted in copious amounts of Fanon; it also inspired the comic series Ninja High School, among many other creations.

On the 9th of December 2011, a two-hour live-action TV movie version aired on the Japanese network NTV. Based on an original story by Yoshihiro Izumi, it starred Kenta Kaku and Natsuna Watanabe as male and female Ranma, respectively, and Yui Aragaki as Akane, along with an impressive supporting cast

. The official NTV site for this live-action special is here

"Oh-No, Honored Customer, you fall in spring of Drowned Troper, is too, too, tragic tale of person too busy editing articles to look where going, now you turn into person unable to turn off computer..."
Feedback