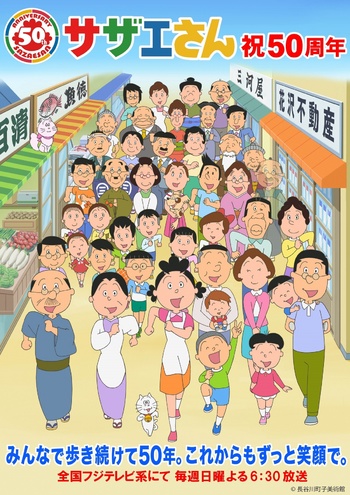 An ancient Japanese comic strip that dates back to 1946 and, perhaps more notably, holds the world record for the longest running anime of all time— new Sazae-san episodes have been airing since October 5, 1969, making it a pop culture staple of Japannote that said, it's not the longest-running animated show period; that honor goes to East German Stop Motion series Sandmännchen, which has been running since 1959. It almost always has higher TV ratings in Japan than any other anime (and even most other TV shows period), and by a significant margin. Airings of Sazae-san in its Sunday evening timeslot regularly have viewership numbering over a tenth of the entire Japanese population. In other words, it's a pretty big deal. Despite this, it is not very well known outside of its home country.

The series centers around Sazae Fuguta, a somewhat typical Japanese housewife with very young siblings. Each episode of the anime is made up of three self-contained stories. It focuses on aspects of traditional Japanese daily life and culture, and hearkens back to an earlier, simpler, less rushed time (since both series are so old), and relies on a Japanese sensibility to appreciate. Hence, its popularity in Japan and obscurity everywhere else.

Outside of 50 episodes from the first year and several from 2005 to 2008 (which are on Amazon Prime Japan), the TV series has never been released on home video due to the dying wishes of its creator, Machiko Hasegawa. This is probably the reason why it has never been dubbed into English or any language besides Japanese. However, some of the original comic strip has been released bilingually as The Wonderful World of Sazae-san

and later The Best of Sazae-san

Compare it with La Familia Burrón in Mexico, which also deals with similar topics and also being a Long Runner. The nearest American parallel one can draw is, perhaps, Peanuts.

Tropes associated with / seen in this series include: