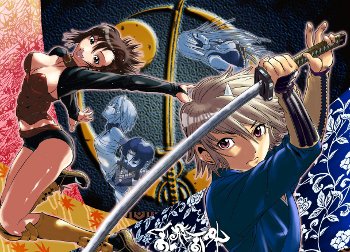 This story takes place during the Sengoku era in Japan. Young orphan Raizou has been rejected all his life because of a horn on his forehead, and lives alone in a small house. One day he finds an almost dead girl named Kagari and nurses her back to health. It turns out that she's a kunoichi serving the Katana clan and was looking for Raizou, who is her recently deceased lord's illegitimate child.

Soon they find two of Kagari's fellow kunoichi, Cold Sniper Kisarabi and Handsome Lech Himemaru, who join them and so this Harem Comedy begins with their quest to rebuild the Katana clan.

, proceed with caution as it contains spoilers.

Tropes that appear in Rappi Rangai: