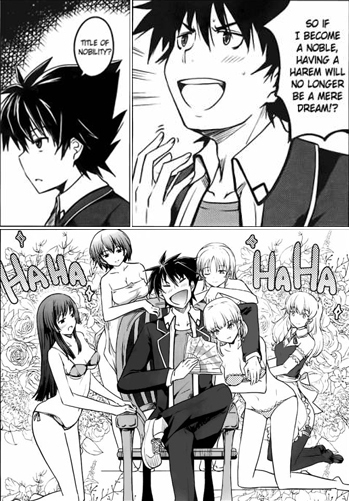 Some people think you can't have too much of a good thing, and that this extends to romantic and/or sexual partners. If one is good, then two is twice as good, and five is better still! The harem seeker is a character who is openly trying to date and/or marry multiple Love Interests as part of a scheme to have lots of attractive partners all to the themself. The seeker has a different goal from the Casanova Wannabe, who aspires to become The Casanova by sleeping with a lot of different people with no commitment, and are also different from a person with a cheating heart, who is in a nominally exclusive relationship but actually sleeps around without their partner's consent. The harem seeker's goal is to keep multiple partners in the long term, and have them explicitly agree to share. The seeker will typically be characterized as a Lovable Sex Maniac or a Chivalrous Pervert. This character can be female, but is more likely to be male; the assumption is that All Men Are Perverts, and that this character will reflect the desires of a male audience.

A harem seeker can be portrayed either positively or negatively, depending on whether having a harem is depicted as a worthy goal, and depending on whether this character has a realistic chance of success. If having multiple partners is depicted as desirable, a harem seeker with the skill to succeed might get involved in Polyamory or even achieve a Marry Them All ending. This can be Wish-Fulfillment for audience members who fantasize about having a harem but consider it unattainable to them in real life, and who get to live vicariously through the fictional harem seeker. In contrast, an unsuccessful harem seeker is likely to be depicted as a comedic loser who doesn't know their own limitations. If the work depicts getting a harem as an immature or unrealistic goal, then giving up on it and deciding to focus on getting just one partner may be a sign of Character Development. A harem seeker who isn't the protagonist may be relegated to the role of comic relief in a manner similar to the Casanova Wannabe.

The Harem seeker can be used as the protagonist of a Harem Genre work or a Romance Game that has a Marry Them All route, since it gives the seeker an obvious motivation to interact with the different love interests and get into the kinds of risque situations that the audience wants to see. On the other hand there's a certain fear by creators that such a character might come across as crass or unrelatable to the audience, and a harem seeker protagonist who's poorly written or given no characterization beyond this trait will just become flat or annoying. Nevertheless, any harem seeker protagonist who manages to have some depth or whose escapades prove fun to watch can seem like a refreshing change from the now well-worn formula of setting up a decent guy with an Unwanted Harem of pushy girls so that all sorts of contrived Accidental Pervert situations ensue.

Polyamory is a related concept, but there are some differences. Not everyone who ends up in a polyamorous relationship is necessarily a harem seeker to begin with, and a harem seeker might initially care more about the sexual than romantic aspects of having multiple partners, though this can change with character development. A harem also tends to be defined as a bunch of concubines or spouses gathered around one central figure to whom all the others are bonded, while the term polyamory is broad enough to include relationships that are more evenly balanced and in which any member, and not just the central figure, is allowed to form romantic bonds with more than one person.