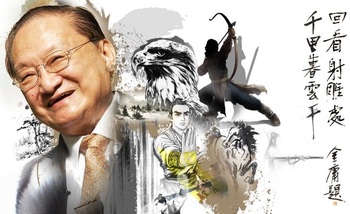 Pictured with portraits of characters from Condor Heroes
Advertisement:

Jin Yong (金庸, 6 February 1924 – 30 October 2018) was the Pen Name of Louis Cha Leung-yung (查良鏞, "Jin Yong" being the constituent radicals which made up the "yung" part of his name), one of the most influential modern Chinese-language novelists and one of the best-selling Chinese authors, well known for his historical Wuxia fiction—he pretty much single-handedly raised the Wuxia to a "legitimate" art form (Wuxia novels having gained an unfair reputation as "things teenagers and immature adults read". While most widely known as a novelist, Cha also co-founded the Hong Kong daily newspaper Ming Pao

in 1959 and served as its first editor-in-chief.) and is the standard against which all other Wuxia novelists are compared—and a great many Live-Action Adaptation series have been made based on his books.

Besides his writing career, Jin Yong was also involved in drafting the Basic Law of Hong Kong just before Hong Kong was handed to over to China. Former Chinese leader Deng Xiaoping was also a fan of his, and invited him over to mainland China to visit.

His novels, in order of release:

Examples of tropes found in his work: