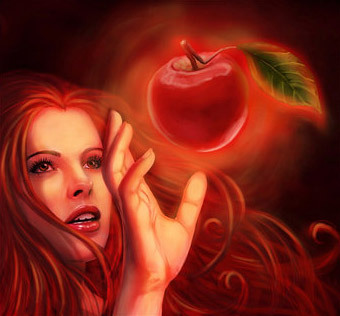 Yummy!
Image courtesy of Daniela Uhlig. Used with permission.
[T]he thorny topic of rules and our all-too-human desire to break them. Bucking the rules is an assertion of freedom over convention, of possibility over constraints, and of self over society.
— Esther Perel, The State of Affairs
Advertisement:

There are two closed doors right next to each other, identical in every way except one: One has a large KEEP OUT sign on it in bold, red letters. Which door is someone more likely to try to open? It's not rocket science.

Forbidden Fruit is a person, place, or thing absolutely irresistible to one or more characters, whose appeal lies solely in the fact it has been forbidden, prohibited, and declared unquestionably off limits. They feel they must have it only because they know they can't or shouldn't have it. Frequently takes the form of a Pandora's Box they are not to open, a Big Red Button they are not to press, an experiment they are not to mess with, a person they are not allowed to be with (romantically or otherwise) or even hear about, a potion they are not to taste under any circumstances, a Tome of Eldritch Lore containing dangerous forbidden knowledge that can drive one to madness, or a place nobody is supposed to ever visit.

Can be a result of Genre Blindness, but not usually, since the attraction of Forbidden Fruit is in and of itself contrary to logic. More often than not, the characters know that going for it would be a stupid move; they just can't help themselves. (They are particularly likely to be young.)

Needless to say, opening the forbidden door or acquiring the Forbidden Fruit leads to disaster 99.9% of the time. Used often in setting Booby Traps, where it becomes Schmuck Bait, when a villain intentionally takes advantage of the power of Forbidden Fruit to lure heroes to their doom. (Unless, of course, he is redeemed by the power of delicious fruit pies.)

The trope takes its name from the Garden of Eden story in the Book of Genesis, where Eve is tempted into eating the Forbidden Fruit (an apple, according to Fanon), making this Older Than Feudalism. (It is also theorized that the "forbidden fruit" of Genesis was actually a fig or a pomegranate, the forbidden Underworld food that did in Persephone, but that's another tale.) Because of this, see also Tempting Apple, when an apple is used to symbolize temptation, though not necessarily because it is forbidden.

In his analysis of the Fairy Tale, The Morphology of the Folktale, Vladimir Propp concluded that the functions "prohibition" and "disobedience" really formed a single plot function — any prohibition was bound to be violated.

The economic principles of scarcity

may go a long way towards explaining this phenomenon. Evil Is Sexy may come into play as well.

See Briar Patching when this trope is invoked by a character. See also Apple of Discord, Artifact of Attraction, Curiosity Killed the Cast, Don't Touch It, You Idiot!, Schmuck Bait, and Wanting Is Better Than Having. Prime source of Cold Turkeys Are Everywhere, Do Not Do This Cool Thing, a "What's Inside?" Plot, and the Streisand Effect. Compare and contrast Thought-Aversion Failure, when someone who is told not to think about something will inevitably think about it - involuntarily (because of the way our brains function), and Forced Meme, where a blatant attempt to make something popular fails due to not having that "mystique" that draws people in.

Someone put up that Don't Swim sign for a reason...still, Anne wants to swim.

Someone put up that Don't Swim sign for a reason...still, Anne wants to swim.