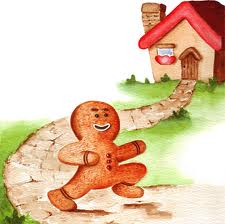 "You can't catch me, I'm the Gingerbread Man!"
Advertisement:

(or "Gingerbread Boy") is the anthropomorphic protagonist of the Fairy Tale of the same name. The Gingerbread Boy makes his first print appearance in the May 1875 issue of St. Nicholas Magazine.

In the original tale, a childless old woman bakes a gingerbread boy who runs away upon creation. The woman and her husband give chase but fail to catch him. The gingerbread boy then outruns several farm workers and farm animals while taunting them with the phrase:

The tale ends when a crafty fox tricks the Gingerbread Boy and eats him.

The story and character make several appearances in popular culture such as Shrek and its sequels, the novella The Gingerbread Girl by Stephen King, Good Eats, or Skepta's 2009 Album Microphone Champion with the track "The Gingerbread man". He's also recast as a mass murdering villain in Jasper Fforde's The Fourth Bear.

In various versions, the Gingerbread Man is replaced by a rolling pancake or another regional delicacy.