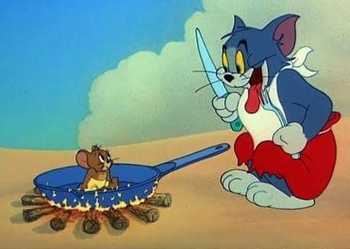 "If I'm gonna eat somebody, it might as well be you."
— Lou the Goanna, FernGully: The Last Rainforest
Advertisement:

On the Sliding Scale of Anthropomorphism, one of the first aspects to be added and the last to be removed after sentience is sapience. Whether they walk on two legs or four, whether they speak or grunt, a cartoon animal will show some level of human intelligence. So when a sapient animal is intending to eat another sapient animal, a certain kind of drama arises.

While this does not strictly count as cannibalism (such as a talking wolf eating a talking sheep), anthropomorphism by definition puts an animal on a level of humanity that the audience is meant to identify with. An intelligent animal ceases to be an environmental hazard and becomes a character. "That bear is trying to eat that rabbit" transitions very quickly to "That man is trying to eat that little girl" when the audience identifies with both bear and rabbit. This makes a very short road to Predators Are Mean, particularly if the predator takes the time to taunt its prey with their intended fate, or if they decide to be 'sporting' and invoke Hunting the Most Dangerous Game. People will naturally wonder why are sapient animals any different in rights than humans, and predators that don't kill their prey swiftly and painlessly will come across as consciously cruel if not outright sadistic for knowingly hurting creatures with the same rights as them.

There are generally three scenarios where this trope can come into play, based on the involvement of humanity:

Likewise, it's possible that the predators have rules about who is, or isn't, on the menu, to say nothing about other things, with the possibility that failing to follow the rules could lead to a murder charge:

When a sapient does this pragmatically for reasons beyond mere sustenance, you have Eating the Enemy.

Often a result of Carnivore Confusion or Let's Meet the Meat. See also Predation Is Natural, which is often used in conjunction with this trope in examples where predators are sympathetic. Predator-Prey Friendship is what happens when two characters of this type avoid their instincts and become friends.

Contrast Vegetarian Carnivore, Furry Confusion, and No Cartoon Fish, which each can be used as methods to avert this trope in Carnivore Confusion-type situations.