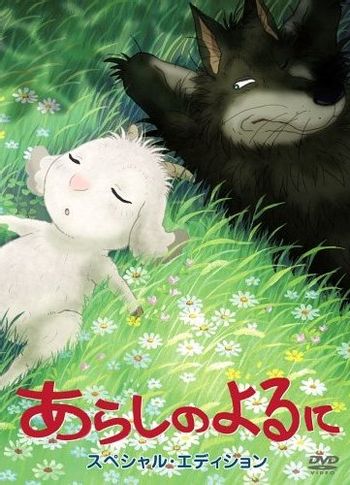 This movie has slightly more sexual tension than The Fox and the Hound.
Advertisement:

(or relationship, depending on whom you ask) between a goat named Mei and a wolf named Gabu. It starts one stormy night when Mei and Gabu, both separated from their companions and terrified of lightning, happen to take shelter in the same barn. There in the dark where they can't see each other's species, they strike up a conversation and learn they have a lot in common. They promise to meet each other again at the same place, and say "one stormy night" as their secret phrase. Imagine their surprise the next day when they discover the truth! Mei and Gabu like each other so much already that they decide to put aside predator and prey in order to be secret friends. However, it's only a matter of time before their respective groups find out they've been fraternizing with the enemy, and brand them as traitors. Will these two be able to find a way to stay together?

God help you if you confuse this with Higurashi no Naku Koro ni or Higanbana no Saku Yoru ni.

Compare The Fox and the Hound and Night on the Galactic Railroad. Contrast Ringing Bell, a Darker and Edgier anime also exploring the relationship between a wolf and an ovicaprid.