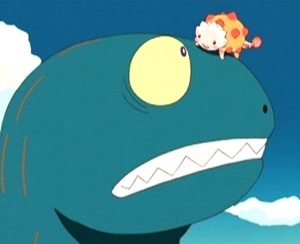 "Umasou is a great name! But what does it mean?"
You Are Umasou (Omae Umasou da na) is a 2010 Japanese animated feature film based on a Japanese children's book series of the same name by Tatsuya Yamanishi, published by Poplar.
Advertisement:

The film follows a Tyrannosaurus rex named Heart who was raised by a Maiasaura. Realizing he was different, he ventures out to find where he belongs. One day, Heart finds a baby Ankylosaurus who mistakes him for his father, accepting "umasou ((you) look delicious)" as his actual name. Originally intending to eat him, Heart comes to be genuinely concerned for Umasou's wellbeing as a familial bond develops between the two.

A second film was released in July 2015.

A third film was originally supposed to be released in Early Summer of 2020 in Japan but had been postponed due to the COVID-19 Pandemic. It will open in Japanese theatres on December 10, 2021.

On December 13th, 2021, Discotek Media announced that they licensed both movies and the TV series, with a Blu-Ray release set for spring 2022.