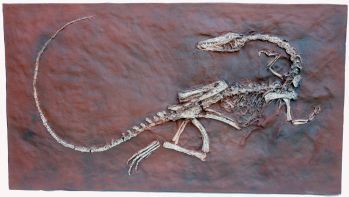 A dinosaur found in the "death pose" (head and tail turned upwards)
Advertisement:

This page is an introduction about stock dinosaurs

. Dinosaurs were a varied group of archosaurian reptiles, including bipedal, quadrupedal, carnivorous, herbivorous and omnivorous species, ranging from the size of small birds to large whales.

All non-bird dinosaurs so far known, as well as the first birds, lived in the Mesozoic Era

, nicknamed "The Age of Dinosaurs", 252-66 million years ago (mya). The era is divided by geologists and paleontologists into three periods; from the most ancient to the most recent, they are the Triassic

. You'll notice that the most well-known stock dinosaurs come from North America during either the Late Jurassic or the Late Cretaceous.

Many depictions of dinosaurs break one or more of these rules (and other, more specific rules as well). When this happens, we get Anachronism Stew and Misplaced Wildlife, and it's easy to say that Artistic License – Paleontology is in play. It is possible for works to follow the rules and still misrepresent dinosaurs, because Science Marches On and "hard fact" is nowhere near the same today as it was a century ago (or in some cases a decade ago)

Stock dinosaurs are usually among the biggest/most impressive members of each dinosaur subgroup, but not necessarily the most common in the fossil record. Just as an example, Tyrannosaurus rex is known only from a dozen specimens, while other less popular dinosaurs have left hundreds of skeletons or even more. At the other extreme, several dinosaurs have left to us one single bone or tooth.

A brief history of popular depictions of dinosaurs

for a more detailed article.

in London introduced dinosaurs to the public. The image they provided was of scaly, bulky, four-legged dragons (quite un-dinosaurian critters to our modern view). Introducing: Iguanodon, Megalosaurus, and Hylaeosaurus. The park also introduced some non-dinosaur reptiles: the flying Pterodactylus and the swimming Mosasaurus, Ichthyosaurus, and Plesiosaurus. The 1864 novel Journey to the Center of the Earth portrayed the latter two as the first "antediluvian reptiles" ever in literature. The first mention of a proper dinosaur in fiction, believe it or not, was by Charles Dickens, who in the opening paragraph of Bleak House (1853) described the streets of London as being so muddy he could imagine a Megalosaurus lumbering up them!

Early 1900s: Updated depictions of dinosaurs were brought to the general public by early paleoartists (beginning with Charles R. Knight

), by distribution of skeleton casts which made life-sized and fairly life-like museum exhibits possible, and by dinosaurs being introduced to films. From this time on, dinosaurs and movie special effects were tightly coupled. Based on the finds during and since the Bone Wars, dinosaurs were now seen as a more varied bunch, with larger and... less large forms, bipedal or quadrupedal. They were still sluggish brutes destined for complete extinction, though. In 1940 Disney's Fantasia reached a large audience, but didn't change the media image much. Introducing: The aforementioned dinosaurs and non-dinosaurs from the Bone Wars plus Tyrannosaurus, Brachiosaurus (now split into Brachiosaurus altithorax and Giraffatitan brancai; the latter of which is infinitely more represented under the B. moniker), ceratopsians Styracosaurus, Protoceratops & Chasmosaurus, Ankylosaurus, Ornithomimus/Struthiomimus, Ornitholestes, Hypsilophodon, hadrosaurs Parasaurolophus, Corythosaurus & Kritosaurus, Plateosaurus, Pachycephalosaurus/Stegoceras, Coelophysis, and the non-dinosaurs Rhamphorhynchus, Dimorphodon, and Archelon.

changed the image of dinosaurs to more active, more intelligent, more caring to their offspring, and well-adapted to their environment (and surviving extinction through bird descendants). Introducing: Deinonychus (the animal who started the scientific view-change), Archaeopteryx (as a proper dinosaur; it's been well-known since the 19th century, but was considered a non-dinosaur before the Renaissance), and Compsognathus (also well-known since the 19th century but constantly confronted with Archaeopteryx since the seventies because it used to be believed its closest relative, and the proof of the relationship between dinosaurs and birds).

1980s/1990s/2000s: The original movie The Land Before Time and other works made in the second half of the 1980s started popularizing the image of dinosaurs as set up by the Dinosaur Renaissance. Since the 1990s, scientifically up-to-date books and computer animation in films/shows (especially in the Jurassic Park and Walking with Dinosaurs franchises) have completed the job. Introducing:

The number of stars for each animal and the Entry Time & Trope Maker-s are (or can be) kinda subjective, and the latest two do not refer to the scientific discovery of the animals but to one of the first noticeable works in which they have been portrayed (or alternatively an iconic museum-skeleton, life-size model, paleo-artistic painting, distinctive anatomical trait etc.). For example, both Velociraptor & Spinosaurus were first discovered and described in the early XX century, but they have ascended to true Stock status only in the last few decades thanks to one single series. Similarly, the belonging of an animal to the Stock or the Non-Stock ensemble is equally sorta subjective and can easily change across the years. For example, Microraptor has become known to science only since year 2000, and is obviously absent in works made before that year, such as The Rite Of Spring of Disney’s Fantasia (made in 1940) or The Land Before Time original film, made in 1988. For a description of all these animals, see these subpages: