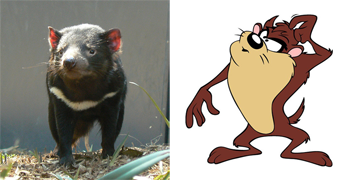 The process of anthropomorphization of an animal character usually involves a lot of implicit decisions of what should be made human-like, and what should stay the way it is. One thing is certain, though, things will not be realistic. On the other hand, some breaks from reality are less acceptable than others...

Sometimes, body organs are shifted or added to funny animals, seemingly in a way to increase identification through anthropomorphism. Some other times, it's just a stylistic convention, used so the creature in question is more easily recognized than if it was drawn realistically.

Though Funny Animal Anatomy should not be noted under Artistic License – Biology, since it's never meant to be serious, some egregious decisions are made in this sense, for either stylistic or anthropomorphic reasons. Some are so omnipresent they even are tropes unto themselves.

Just remember that Tropes Are Tools and more often than not these are invoked simply because it's more interesting, appealing, or expected to the viewer to utilize them and can make storytelling easier in some cases.

The Law of Conservation of Detail (often used with the Rule of Personification Conservation) makes it easier to skim over those things if it's not relevant to the story, and well, sometimes you simply want to avoid drifting gazes or indeed Squick regardless of who the target audience is.

This trope page and its child tropes apply to animals on the Sliding Scale of Anthropomorphism from Nearly Normal Animal to Funny Animal. Does not apply to Beast Man, as characters who fall under that trope are more human than animal and thus should follow human anatomy naturally. If they don't refer to Bizarre Alien Biology.

This trope page is meant to catalog only examples which do not fit the child tropes below, are specializations of these tropes, or are especially egregious.