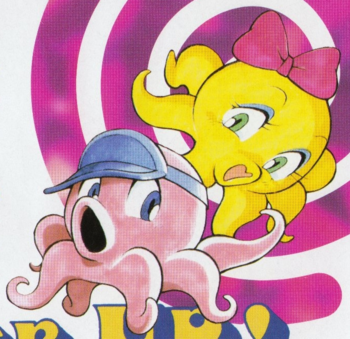 These cartoony depictions of octopi and squid are very common in Japanese culture and other parts of Asia, with a distinct Q*Bert-like design featuring a tube-like mouth/snout on their faces, inspired by the siphons located on the backs of these animals. While the aforementioned organ serves to allow locomotion for cephalopods by expelling water in real life, in this case the siphon is subjected to some artistic liberty and made into a stylized mouth, which mainly serves to anthropomorphize them. Given how this gives the funnel-mouthed cephalopod a turret-like appearance, you can also expect its "mouth" to shoot or spit out all sorts of projectiles besides ink.

Most examples of octopi given this treatment are often colored bright red to resemble a steamed octopus, and as such are commonly used as cheerful mascots for takoyaki stands and the like.

This type of portrayal, despite what you'd initially believe, is actually Older Than They Think. The earliest example is likely The Dream of the Fisherman's Wife, an ukiyo-e piece published in 1814 depicting an octopus with its back depicted as its "face", making this trope Older Than Radio.note Incidentally it is also the Ur-Example of Naughty Tentacles. Octopoid Aliens in Japan tend to sport this look as well.