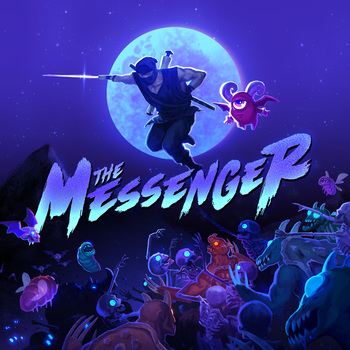 As a demon army besieges his village, a young ninja ventures through a cursed world, to deliver a scroll paramount to his clan's survival.
Advertisement:

The Messenger is a 2018 Retraux Metroidvania platformer video game developed by Sabotage Studios and published by Devolver Digital.

Orginally released only on Nintendo Switch and Steam the game would later receive releases on PlayStation 4 and Xbox One.

When a demon army besieges his village, a young ninja must journey through a cursed land to deliver a scroll that is paramount to his clan’s survival. The game is a retro-styled platformer which allows the player to travel through time between an 8-bit styled game and a glorious 16-bit styled adventure.

The game itself is a huge homage to platformers like Ninja Gaiden and its influence is very obvious not only from having a ninja as the main character, but also having carefully designed levels with excellent controls and being very challenging.

A free Downloadable Content expansion called Picnic Panic was released on July 11, 2019. It involves the Ninja traveling to a tropical island to rescue the Phobekins from Barma'thazël. The area contains three new areas and bosses, as well as a literal Money Sink for extra time gems. Watch the trailer here

In 2020, Sabotage revealed that they are working on a game called Sea Of Stars, a Retreaux turn-based Role-Playing Game set in the same universe as The Messenger, and will serve as a Prequel, currently slated for a Holiday 2022 release. Notably, Yasunori Mitsuda will be a guest composer for the game.

Not to be confused with the 2001 French computer game The Messenger 2001.

Tropes Associated with The Messenger include: