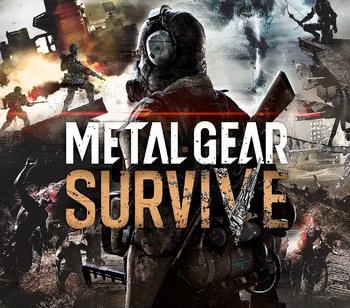 Metal Gear Survive is a survival action game that was released on February 20, 2018 for the PlayStation 4, Xbox One, and PC. It is a spinoff of Metal Gear Solid V.

Taking place moments after the events of Metal Gear Solid V: Ground Zeroes, the burning remains of Big Boss' Mother Base continues to crumble after XOF's attack. However, Mother Base does not unceremoniously sink to the bottom of the ocean. Instead, it's sucked up by mysterious wormholes appearing on top of it. The Militaires Sans Frontières survivors left behind are also sucked up and find themselves in a world inhabited by zombie-like creatures with crystals sticking out of their heads. The survivors get in touch with other inhabitants and realize that their location in this world is a fenced off area surrounding the remains of their ruined Mother Base.

There are some game modes where players can hide (Stealth), collect material and resources in order to build new pieces of equipment, new weapons and new camps (CRAFT), and sometimes they also have to cooperate with other players to get their hands on powerful equipment (COOP) or to fight against the waves of Wanderers attacking the camp (DEFENCE).