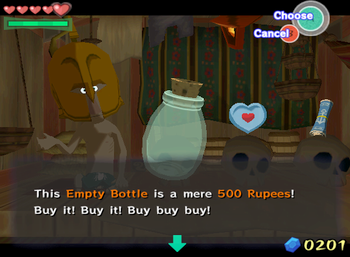 Either glass is rarer than gold in this universe or he’s overcharging Link for his adventuring supplies.
"This is a place where having the ability to bake cakes is a mark of considerable status!"
— Yahtzee on Minecraft (as imps bow down to worship his avatar's superior cake-baking abilities.)
Advertisement:

In video games, seemingly common items often take an excessive amount of effort or money to acquire. You may expect an item to be common based on real-life experience and even see them used all over the place in the game, but you can't pick one up until you've completed the proper Side Quest. Probably not until much later into the game.

This is frequently seen with capacity upgrades. Being able to hold more money and items is a big deal in a lot of games, so coming across a wallet or sack fifty floors deep into an ancient dungeon often makes the whole trip Worth It.

Par for the course in most Point-and-Click Adventure Games, where there tends to only be one book of matches, or one pencil in the entire game universe.

A form of Gameplay and Story Segregation. Often applies to parts in a Chain of Deals or Comically Small Demands.