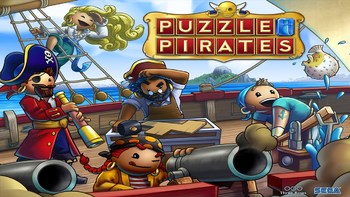 Yohoho! Puzzle Pirates is an MMO created by Three Rings, Inc. In it, players take the role of Pirates in a cartoonish world. The game is divided into a number of servers, called Oceans; each Ocean consists of a number of islands separated into archipelagos; within this framework, players can partake in a number of activities, from sailing the high seas with fellow pirates in search of treasure, to working in or even owning and operating shops, to playing classic games like Hearts and Poker.

What makes this game unique is that all of its major tasks, from sailing a ship to distilling rum, are staged in the form of Puzzle Games. These include things like Match Three Games (for tasks like pumping the bilge water out of a ship, digging for treasure, or hauling it from a shipwreck), Falling Blocks (operating a ship's sails, as well as Swordfighting, in the vein of Super Puzzle Fighter), pattern-matching games (shipbuilding, for instance), and other, more exotic fare.

Another hallmark of the game is that its economy is almost entirely player-driven: players buy or forage commodities from islands, sail them back to their shops, and use them to manufacture goods using player-provided labor. This results in the game economy being remarkably similar to that of the real world.

"Did you hear the cannon shots last night?"