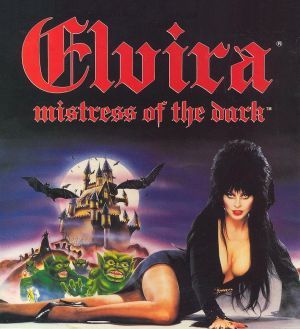 A series of point and click/role playing computer games based loosely around the Cassandra Peterson character Elvira. In 1990, HorrorSoft Games released the first installment, Elvira: Mistress of the Dark. The game was surprisingly well received by critics and adventure/horror fans, and in 1991 the follow-up, Elvira II: The Jaws of Cerberus was released to even better reviews than the original.

In addition to being surprisingly good, the games were also known for being ridiculously challenging and ridiculously frightening, while maintaining a dark, tongue-in-cheek sense of humor. Not surprisingly, the majority of laughs came from Elvira's comments.

Tropes within Elvira I: