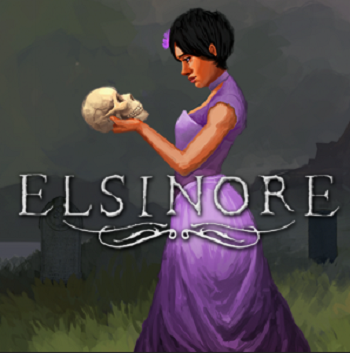 Elsinore is a point-and-click adventure game by Golden Glitch Studios. It was funded

The game adapts the plot of Hamlet placing us in Ophelia's shoes. She bears witness to the events of the play until a spy knifes her and leaves her body in a pond, bringing her story to an end.

...Except, it doesn't. Ophelia wakes back up in her bed on Thursday and finds events taking course just as they did before. Only a strange actor named Peter Quince appears to remember the past loops. He warns her she has four days to uncover the conspiracy behind her own murder while the royal family unravels and Prince Fortinbras of Norway lurks at the edges of the map.