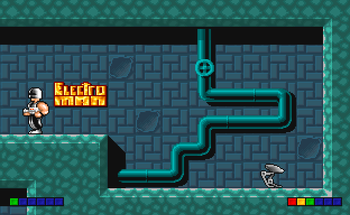 "We have to be careful. This is an emergency area!"
Jacek, every time he (re-)starts at a checkpoint
Advertisement:

Electro Man is a VGA sidescrolling DOS computer game developed by xLand Games and published by Epic Megagames in 1993. It was initially released in Poland (and later Germany) without the involvement of Epic as "Electro Body" complete with some changed graphics and CGA, EGA and composite monitor display modes. Though initially offered under a shareware license, the game was released as freeware on June 25, 2006.

The player controls "Jacek" the electro man (who is very similar, design wise, to RoboCop) as he travels through eight levels, shooting enemies, using teleporters and upgrading his main weapon.

Has nothing to do with a series of Adobe Flash games known as Electric Man.