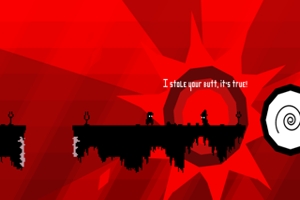 It's always his fault...
You lost an arm
in the Disco Wars of 1515.
You lost an eye
in the War of Rock ‘n Roll.
You lost both legs
defeating DJ Deadly Skillz.
And you lost your ENTIRE butt
to an Evil Wizard.
This is the story of your Quest… to get revenge for your butt!
- The intro to the first level

Yeah, this is the ridiculous yet awesome premise of Electronic Super Joy, a 2D platformer created by Michael Todd.Playing as a monochromatic wanderer, you traverse levels full of homing rockets, killer animals and lasers to get revenge for your butt! Much like Super Meat Boy, from which this game is probably inspired, you don't have that many special abilities and die in a single hit. Unlike Meat Boy, however, there are checkpoints, so the overall difficulty is a bit lower. That doesn't really say much though.

It's also notable for its catchy soundtrack, fabulous flashing technicolor backgrounds and abundance of bad puns.

It was released on PC on 23rd August 2015, and you can buy it from the official site