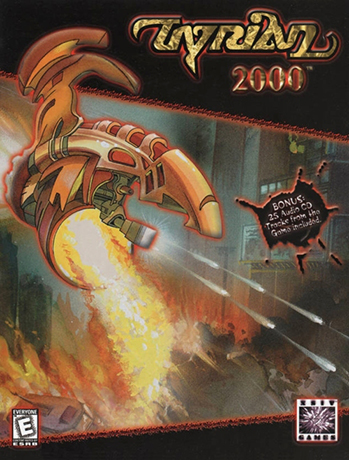 It is the year 20,031. You are Trent Hawkins, a terraformation pilot currently assigned to the planet Tyrian, the only planet in the entire sector that contains samples of Gravitium, a material that causes huge chunks of its landmass to float in the air. While on the job, Trent's best friend, Buce Quesillac, a Hazudra, was shot in the back by a hoverdrone belonging to Microsol, the company in charge of the terraformation efforts on Tyrian. With his dying breath, Buce informs Trent that Microsol intends to use the Gravitium to take control of the sector, and that he's next on their hit list. With that, Trent begins a long, dangerous fight for his survival.

For a game of the genre, Tyrian actually has a surprising amount of story to it, primarily in the form of datacubes that can be collected from certain enemies and read between levels when you get the opportunity to upgrade your ship in the game's Story Mode. Tyrian also includes arcade mode for both one and two players on the same computer or over a local network.

With great graphics for its time, addictive gameplay, and catchy music, along with a wide variety of levels, weapons, enemies, and hidden secrets, Tyrian is a game with a lot of replay value. It is considered by many to be one of the best scrolling shooters ever made.

Three iterations of the game were released. Version 1.x contained three episodes (with the first being released for free, as was common among shareware publishers in the 90's) and chronicled Trent's escape from Tyrian and his hunt for the Microsol invasion fleet. Version 2.x added a few extra levels to Episode 1 as well as a new fourth episode featuring a raid on the research planet Ixmucane. A later re-release, Tyrian 2000 (Version 3.0), added a short fifth episode. Game Boy Color and Game Boy Advance ports were started but never released. ROM images of these uncompleted games are available from the author's website. An iPhone- and iPod touch-compatible applet based on Version 2.1 is also available.

It is freeware since 2004. The official page of author Jason Emery no longer exists (and was quite sparse), so it's better to refer to this excellent fansite

or this excellent wiki

, with the game's music encoded into a collection of MP3 files (about 12 times as large, disk-space-wise, as the game itself) as a bonus download. Even the graphics were released with an open license

. A source port of the game that ports the game from Turbo Pascal to C, called OpenTyrian

, is available for many platforms and consoles; OpenTyrian2000

, a fork of OpenTyrian that supports Tyrian 2000, is also available.

Back around 2005, a small group of fans got the OK from Jason Emery to make a freeware sequel, which would have featured a retired, alcoholic Trent Hawkins fighting against the Zica, who had returned to conquer the sector. Unfortunately, the project never seems to have left the planning stage (scroll down to the January 27, 2005 entry on this page