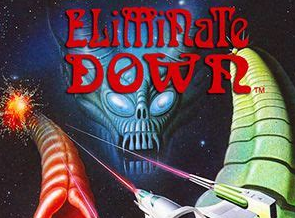 In the galactic year 299X, a time when humanity has colonized most of the Milky Way, a mysterious space-time distortion is detected. While the distortion exists for just a brief moment, the same can't be said for the lifeform that emerged from it. Dubbed the "Amulet Monster" by humanity, it immediately makes a direct charge for Earth, expanding and generating an army all the while. The entire human military force is arrayed to intercept the Amulet Monster's forces, while your vessel, the state-of-the-art Steel Pylon, is commissioned to seek out and destroy the Amulet Monster itself.

Eliminate Down is a horizontal scrolling Shoot 'Em Up for the Sega Mega Drive developed by Aprinet and published by Soft Vision in 1993. The game gave players immediate access to three directional-based weapons that could all be powered up as they fought strange alien (?) enemies through eight, enormous levels. The game was never released anywhere other than Japan and Korea.

Reminiscent of Toaplan's Hellfire, the Steel Pylon had three firing directional weapons all ready at their disposal: a forward firing blaster, a rear laser attack and diagonal, four-way firing bombs. The forward firing attack also had the Super Crash Shot, a small white straight-firing rocket, that with upgrades would change into a long white laser beam that could fire through foreground objects. Unlike Hellfire however, the game had no checkpoint system, though the game made the players restart a level once they lost all of their lives. Extends were set at every 100,000 points.

The weapons were upgradeable by collecting Power-Up icons; obtaining a certain number of Power-Ups would level-up the size and strength of the player's weapons, but the weapons were upgradable to just 3 Levels. The only other defenses the players had was a shield pick-up called the Barrier that protected the ship for at least two hits. The A and C buttons allowed the player to switch among the three weapons. Players could also change the speed of the ship by pausing the game and adjusting the speed level on the pause screen. Eliminate Down also had a mini-game that was playable at the main menu similar to Concentration where players had to find the right image under a certain time limit.

Not to be confused with Border Down.