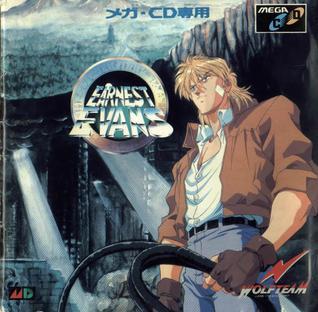 Earnest Evans is a 1991 platform sidescroller made by Wolf Team, with music composed by Motoi Sakuraba for the SEGA MegaCD (in Japan only), with a watered down Genesis/MegaDrive port released overseas. It is chronologically the first chapter of the "Earnest Evans trilogy", ironically being the only game in which you play as Earnest.

The game takes place in 1926. U.S. treasure hunter Earnest Evans is sent on a special requested assignment by President Calvin Coolidge to obtain the Necronomicon. Despite not usually taking jobs or requests, curiosity gets the better of Earnest and he accepts the job...and along the way, finds himself entangled in a sinister plot hatched by mafia bigwig Al Capone and cult leader Ulrich to resurrect the dark god Hastur. During his adventure, Earnest is joined by Annet Myer, the heroine of El Viento, whom he finds in an old temple, offered as a sacrifice to Hastur, and the enigmatic Zigfried Munchaunsen, a(n eventually) former colleague of Capone who also seeks to stop the return of Hastur.

The Mega Drive/Genesis version goes a different route, set in the 1980s, thus attempting to make it a sequel to El Viento, wherein you are Earnest Evans' grandson, also called Earnest Evans, as you attempt to collect three special idols before they are used by a never-appearing villain named Brady Tressider, to summon another dark god called Mavur. Or, at least, that's what the manual says.

The titular hero is made up of multiple sprites put together to create the illusion of more fluid movement, a sprite technique that would later be used to better effect by Capcom for X-Men: Children of the Atom on the Sentinel and Cyberbots, and Konami's Castlevania: Symphony of the Night.

Up until April 2018, plot details were scarce due to a lack of interest in translating the game's dialogue up until a collaboration between shmuplations

and RageQuitter87 helped shed light onto the game's story for westerners. You can read the translation of this game (as well as a general guide) in the Earnest/Annet trilogy shrine by RageQuitter87 here

, where he also has a look at El Viento and distant sequel Annet Futatabi.