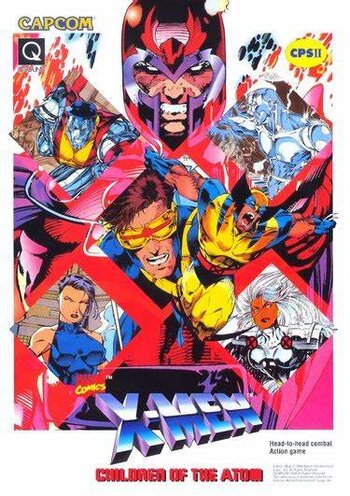 X-Men: Children of the Atom is a 2D Fighting Game, and the beginning mark for the Marvel vs. Capcom series.

Sometime around 1994, Capcom gained the rights to make video games based on the heroes of Marvel Comics, starting with The Punisher arcade game. This being the early 90's, with Street Fighter mania in full swing, they decided to start with a fighting game using the X-Men.

The game had six of the X-Men (Cyclops, Wolverine, Psylocke, Iceman, Colossus, and Storm) and four of their enemies (Silver Samurai, Omega Red, Spiral, and a Sentinel) taking each other on in a series of one-on-one battles, before fighting their way through the Juggernaut and facing Magneto in a final showdown. Akuma, from Super Street Fighter II Turbo, makes an appearance as a Guest Fighter Secret Character, thus paving the way for the eventual coming of Capcom vs..

The game featured a unique exaggerated and animesque style accompanied by massive screen-blasting Super Combos and the ultra-high jumps needed to avoid them.

Naturally, the game was a hit, and it was followed in 1995 with Marvel Super Heroes.