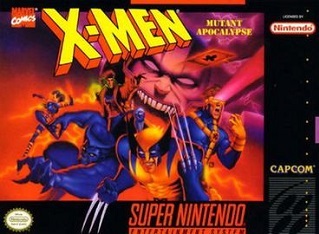 Mutants—humans possessing incredible powers as a result of genetic mutation. Persecuted by their fellow man for being... different. In order to teach mutants to use their powers for the benefit of all, even those who hunted and feared them, Professor Charles Xavier created the X-Men. His ultimate goal: to create a world where humans and mutants can live together in peace.
Genosha, a little known island where mutants are imprisoned, forced into labor by a brutal army and robot Sentinels. There is one being whose evil mind has other, far more sinister plans in mind for those captured mutants of Genosha... the monstrous entity known as Apocalypse.
X-Men, you must depart for Genosha and free our fellow mutants! Good Luck.
— Opening Narration
Advertisement:

X-Men: Mutant Apocalypse is a Beat 'em Up / Platform Game developed and published in 1994 for the Super Nintendo by Capcom, based on the popular X-Men comic, with a few elements from The '90s cartoon series. Professor Charles Xavier has dispatched five of his best X-Men to the island of Genosha to rescue fellow mutants that are being forced into labor by the evil Apocalypse. However, after completing this mission, Magneto arrives, threatening to destroy Genosha in 24 hours, so the heroes depart to his space station, Avalon, to stop him before he destroys the world.

Gameplay-wise, the player has an attack button, a special attack button, and a jump button. You can choose from Wolverine, Gambit, Psylocke, Cyclops, or Beast, each with their own set of moves and combos. At the title screen you can choose to play Mission Mode (the normal story) or Training Mode (letting you practice the first stage for each character). At the start of the game, each character has a mission to complete. When all missions are accomplished, the game continues linearly.

See also Marvel Super Heroes: War of the Gems, which uses the same gameplay and mechanics.

Not to be confused with X-Men: Apocalypse.

On defeating Magneto: You lost because you ain't the best there is, bub. An' that's all.