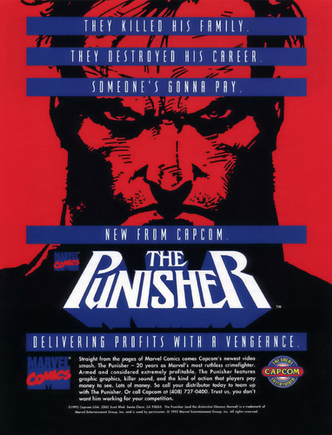 The first of many Capcom games to be based on a Marvel Comics license, The Punisher is a Final Fight-like Beat 'em Up, in which two players can have The Punisher team up with S.H.I.E.L.D. agent Nick Fury. (The two characters are identical in gameplay, though they have different dialogue when played alone.) Originally a 1993 Arcade Game, a port for the Sega Genesis developed by Sculptured Software was released in 1994.

The next morning, the police searched through the rubble of the King building. They found over 296 ex-criminals.
But they could not find any body that could be identified as the Kingpin.
Vengeance burns eternal.