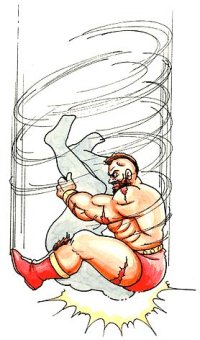 If nothing else, that guy's going to get really dizzy.
Advertisement:

In real life, a piledriver is a move where someone grabs an upsidedown opponent and slams them into the ground headfirst. Damaging, yes, but not awesome enough.

Enter the spinning piledriver. In this move, the attacker grabs the opponent in midair, spins rapidly, and slams them headfirst into the ground. That one word makes one hell of a lot of difference. To be able to do this variation of the move, it generally follows a Launcher Move, but it's not required.

This is a specific type of Meteor Move, but is distinguished in that the attacker is part of the meteor. While spinning. Enough spinning could make very large holes in the ground. Ninjas in media often perform a head-first variant of this move called the Izuna Otoshinote "Izuna" meaning either the Japanese common name for the least weasel

in Nagano Prefecture, its tengu deity Izuna-gongen, or the weasel-like kuda-gitsune (pipefoxes) said to be wielded by his cult. (Izuna Drop), a name originating from the protagonist of Kamui Gaiden.

An essential part of the repertoire for the Wrestler in All of Us.

Compare Hurricane Kick for another exaggerated version of a martial art move.

A demonstration of Ryu's trademark technique in Ninja Gaiden Sigma

A demonstration of Ryu's trademark technique in Ninja Gaiden Sigma