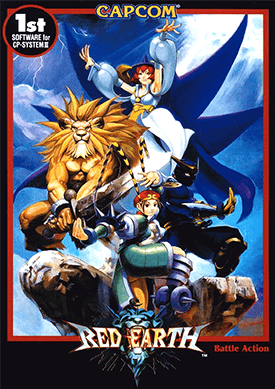 Red Earth, known as Warzard (ウォーザード , Wōzādo) in Japan, is a 1996 fantasy-themed head-to-head Fighting Game released by Capcom as a coin-operated arcade game. It was the first game for Capcom's CP System III hardware, the same hardware on which the later Street Fighter III and JoJo's Bizarre Adventure games ran. Red Earth was the only CPS-3 video game that was never been officially ported to home platforms or subjected to Capcom Sequel Stagnation, although its characters have appeared in later Capcom games. That eventually changed when it was announced in February of 2022 that Red Earth would join nine other games in Capcom Fighting Collection for current platforms with Rollback-based online play to be released the following summer.

There are four selectable characters and eight computer-controlled opponents; and two game modes, Quest and Versus. In Quest Mode, the player chooses one of the four main characters, and progresses through a story while battling the various boss characters and gaining experience. In Versus Mode, two players fight against each other, but they can only choose from the four main characters. Red Earth also uses a special password system that allows the player to play the game later on the same skill level reached when it ended the last time. The character is able to "learn" special attacks and gain new equipment depending on the skill level that has been reached.

The fighting engine itself is similar to games such as Street Fighter, but with a few differences. First of all, the health bar of the enemy "bosses" the player battles in Quest Mode is displayed across the bottom of the screen, and is much larger than that of the players. Also, as the player lands hits on the bosses, various coins and treasure chests come out. Collecting coins provides experience, while various things can be found in treasure chests, such as orbs (used for super attacks) and food (that restores health). These elements make the game more of a Boss Rush action/beat-em-up style game rather than a traditional one-on-one fighter.

In addition, Red Earth is one of few Capcom games with Finishing Moves. They include splitting the opponent in half either horizontally or vertically, decapitation, artery rupture, organ removal and limb slicing; the Darkstalkers series also holds this distinction.

The character sheet is in the works.