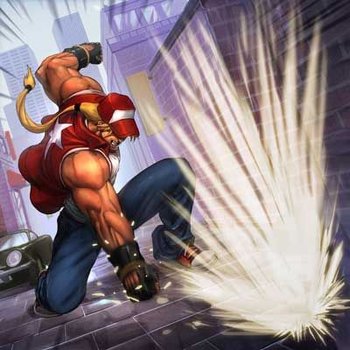 A ground wave is a condition in which the solid ground ripples and moves in waves, the way water in a pool will ripple when a rock is tossed in. In real life, this can only happen as a result of a nuke bomb detonation or a huge explosion (see the PEPCON disaster under Real Life, below). In fiction, some character with either superpowers or incredible strength strikes the ground — or the opponent it is fighting throws them at the ground — so hard that the ground rolls, ripples and moves in response. See Shockwave Stomp.

Note that, if the landing just creates a big hole and not a ripple effect, it's a Ground-Shattering Landing.

Might occur via a Ground Pound or Ground Punch. Compare Super Rug-Pull. Can overlap with Tremor Trampoline if the wave is powerful enough to throw someone into the air.