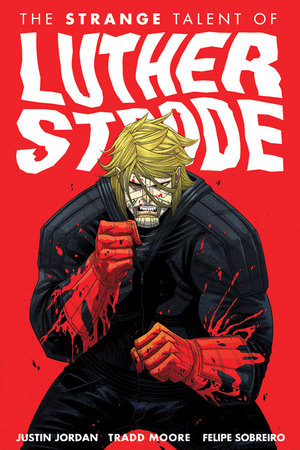 The Strange Talent of Luther Strode is about your average geek, the eponymous Luther Strode. Tired of being bullied, Luther sends for an exercise course from the back of an old comic book. What he gets is the instruction manual from a murder cult as old as mankind that does everything that it promised—and more!

A six issue mini series written by Justin Jordan, illustrated by Tradd Moore and colored by Felipe Sobreiro, this Image Comics imprint is a demented deconstruction of Charles Atlas Superpower. It also contains some "sweet, sweet ultraviolence" in the words of the writer. In other words, it is not for the faint of heart.

The first issue of the sequel, The Legend of Luther Strode, was released on December 5, 2012 and wrapped up with its sixth issue on August 7th, 2013.

The first issue of the final miniseries, The Legacy of Luther Strode, was released on April 8, 2015 and concluded May 25 2016.

The Strange Talent of Luther Strode contains examples of: