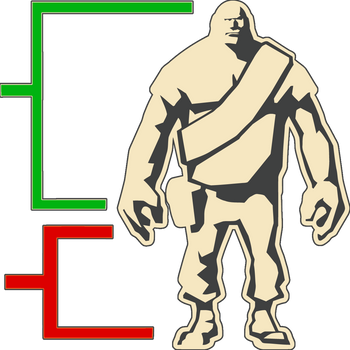 "Running is for cowardly babies."
"I should tell you right now, I'm kind of hard to fit. I wear a 66 long and a 31 waist."
— Kronk, The Emperor's New Groove
Advertisement:

A caricature style of drawing the human male figure as having a huge torso and arms, but legs that appear too skinny and/or too short to support the upper body. This trope is an exaggeration of male bodybuilders (or any reasonably toned man with low body fat) having the ideal "triangle" figure of a broad chest and shoulders with a narrow waist. The drawn form of this can range from a moderately large torso and legs that are just a bit too skinny, to legs that are short and stubby and the torso is freakishly huge to keep the guy still at normal height.

Anthropomorphic bipedal animals can also look like this. When it involves Super Heroes, it overlaps with Heroic Build. Also commonly seen in Captain Space, Defender of Earth!.

This still requires legs being proportionately small compared to the torso, not simply a guy with a big, muscular chest and/or arms. Real Life humans are unlikely to be Top Heavy Guys note some Murderball players and other wheelchair athletes may come close due to muscle atrophy in their lower bodies; though some animals such as penguins as well as bears and some apes when they stand on their hind legs would count as real-life examples.

Muggshot's arms are so big, he walks on them.

Muggshot's arms are so big, he walks on them.