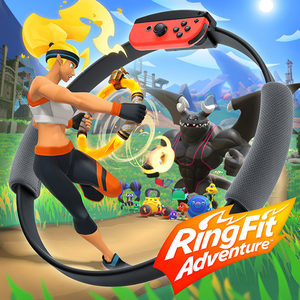 Wii Fit: The Next Generation
Advertisement:

Nintendo has been no stranger to exergaming. In 1987, they distributed the originally Bandai-published game World Class Track Meet for the Nintendo Entertainment System in the West, which was controlled entirely with a pad called the Power Pad. A more recent and far more successful example was Wii Fit for the Wii in 2007. On September 6, 2019 Nintendo announced they were coming back around to that concept by teasing some new accessories for the Nintendo Switch in a new teaser video. On September 12, 2019 that concept was revealed in full with the new game Ring Fit Adventure which would release worldwide on October 18, 2019.

Instead of an unthemed workout like the earlier Wii Fit series, Ring Fit Adventure is a fully-featured (albeit lighthearted) fantasy RPG. note Some fans have taken to calling it "Out-of-Breath of the Wild." In the game, a peaceful kingdom is invaded by Dragaux, a giant, chiseled dragon with an ego to match his oversized muscles. To defeat him, the player teams up with Ring, a sentient Pilates ring, then travels the countryside collecting treasure, becoming fit, exploring remote locations, collecting treasure, and fighting Dragaux's forces along the way. Like most RPGs, battles are turn-based, with the player inflicting damage by how well they performs various exercises. By improving their character level, players acquire more complex and more powerful routines.

The game comes with two new Joy-Con accessories: the Ring-Con and the Leg Strap, which hold the Joy-Cons and use their motion controls to translate the player's movements into game action. The game also includes a General Fitness Mode for players who want to exercise without dealing with the story line, and a "Silent Mode" for players who don't want to disturb their neighbors with overly vigorous workouts. There's also a "Multitasking Mode" wherein you can use the ring-con with attached joycon as an exercise device on its own without the Switch being powered. It will log up to 500 reps in this mode and reward you for an in-game coin for every rep you do.

On March 26, 2020 a new update for the game released that added a rhythm game as well as giving Ring an option for a female voice. The update also added a Quick Run Mode where you can run casually through the stages without experiencing any battles or gaining experience points.

The debut video is here

After stunning an enemy with a red attack, the Trainee can follow up by doing rapid Ring Lifts to pummel the target repeatedly.

After stunning an enemy with a red attack, the Trainee can follow up by doing rapid Ring Lifts to pummel the target repeatedly.