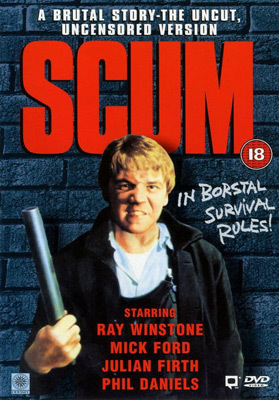 Scum is a 1979 British film directed by Alan Clarke, originally based off of a 1977 BBC Play for Today. In 2010, the film was remade by Kim Chapiron, under the title Dog Pound. The following page covers tropes appearing in all three versions.

The film is very notable for several reasons:

That said, the main gist of the film(s) is something like this:

Three thugs, Carlin (Butch in Dog Pound), Davis, and Angel, are all taken into custody and brought to a good ol' British Borstal (an American Juvenile Correctional Facility in Dog Pound). What they proceed to discover is that where they have been sent is in fact a Wretched Hive of racism, violence, and corrupt wardens/officers. And that's just the beginning. From then on, it gets worse. Much, MUCH worse.

When listing the tropes, everything appears in all three versions, unless otherwise noted.