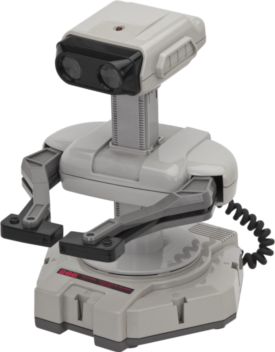 Without him, Nintendo would’ve never become as big as they are today.
Advertisement:

In the wake of The Great Video Game Crash of 1983, Nintendo needed to give their upcoming console, the NES, an edge to make it attractive to market to leery vendors and customers alike. The answer came by packaging a toy and promoting the NES as your means of interacting with it (and could play other games on the side, ostensibly). The Robotic Operating Buddy, or R.O.B. (Family Computer Robot in Japan), was that toy, and it worked just enough for word-of-mouth to take over selling the systems. His role completed, the plucky little robot was quietly retired, but he continues to live on in the hearts of nostalgic fans and retro hobbyists alike.

In reality, R.O.B.'s only been formally compatible with two games — Gyromite, his pack-in titlenote and the far more well-known of the two and Stack-Up. Both games star Professors Hector and Vector as they work together with R.O.B to bypass obstacles and achieve given win conditions, with most of the gameplay switching between controlling the professors and inputting instructions for R.O.B. to follow.

Although R.O.B.'s original purpose is fairly obscure nowadays, he is best known by Nintendo fans for his myriad of cameos throughout several Nintendo games.

R.O.B. and his games provide examples of: