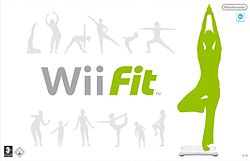 Remember how your parents told you playing video games would make you gain a bunch of weight, lead to bad posture, etc, etc? Well, guess what? They're wrong!

Wii Fit, part of the Wii Series (which includes Wii Sports and Wii Play), is an interactive series of exercises, mainly using the Wii Balance Board. These exercises include yoga, strength exercises, aerobics, and fun little balance games. The game also keeps track of players' body mass index and weight.

It's a huge seller, and the Balance Board it comes with is also compatible with some other Wii and Wii U games.

As with any gym or exercise regime, you'll get out what you put in. Many of the toughest exercises are also the ones most easy to do even without the game (running, press-ups, or jackknifes), and the rest could easily be provided by some yoga and aerobic exercise videos. What Wii Fit provides that videos and willpower don't is a regular schedule and encouragement to keep going along with the ability to match your progress against earlier efforts.

Of course, there is some debate as to how effective it actually is as a weight loss tool (and some research shows that Wii Sports is more effective in that respect).

There is a sequel, Wii Fit Plus, which makes the original game pretty much obsolete as it contains everything the original does and more. A second sequel, Wii Fit U, is accompanied by the Fit Meter, a pedometer that tracks your physical activity and calories burned outside of using the game. The data can then be synced to your profile in the game. The female and male trainers also appear in the Super Smash Bros. series as playable characters.

Though the "Wii" branding was abandoned with the introduction of the Nintendo Switch, the Wii Fit series received a Spiritual Successor in the form of Ring Fit Adventure.

Is your body ready?