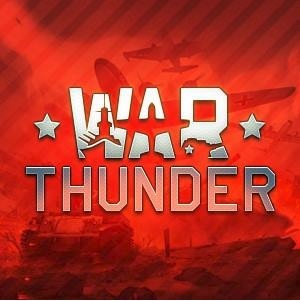 Victory is Ours!
There is a beast, deep inside you.
It will not die.
It will fight back!
Advertisement:

is a cross-platform MMO (PC, macOS, PS4, Linux), that has to do with vehicular combat between fighters and ground vehicles from pre-World War II, to the jets and main battle tanks that filled the battlefields early in the Cold War. The game involves all five of the major aircraft players in World War II: the United States, Nazi Germany, Imperial Japan, United Kingdom, and the Soviet Union. And over time, many more planes and ships will be added. Open beta testing on the Windows PC began on November 1, 2012, with 200 aircraft and 600,000 players. On May 15, 2014 tanks and other armored vehicles were made playable, starting with the Soviet Union and Nazi Germany. Later patches gave the United States their own complete tech tree of armored fighting vehicles. A full line of British tanks came in December 2015, and French air and ground forces in 2017. The game was fully released on December 21, 2016. With update 1.77 in March 2018, the game finally implemented the first "modern" vehicles with the American M1 Abrams and British Challenger 1 main battle tanks, with more modern tanks being confirmed to be in the works. War Thunder's developer is Russian-based Gaijin Entertainment, of IL-2 Sturmovik fame.