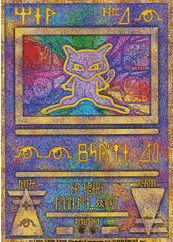 Good luck using a card you can't even read.
Advertisement:

You've seen it. A special trading card gets released. There's only one copy of it in existence, it's got flashy holofoil all over it, it's worth millions...the question is, is it actually useful in the card game? Hell, no. That million dollar card or item or whatever costs a lot and is a prime collector's item, but it's useless.

Promotional Powerless Pieces of Garbage are one of the more infuriating types of Revenue-Enhancing Devices when they are sold and purchased in Real Life.

On the other hand, if all of the Revenue-Enhancing Devices are like this, less wealthy gamers may appreciate the subversion of Bribing Your Way to Victory. Indeed, this is a lot of the balancing factor in making things exclusive to begin with; you need to make them valuable enough that people will show up to get one, but also inessential enough that the millions of people who can't make it aren't going to be annoyed at you. A common solution is making the item only cosmetically different from something more widely available.

See also: Bragging Rights Reward and Power-Up Letdown. Compare CCG Importance Dissonance. Contrast Power Equals Rarity. If it's obtained infrequently at random instead of as a special promotion, it's a Junk Rare.