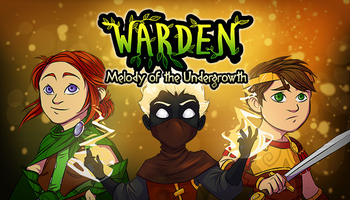 Left to right: Medeira, Bitt, and Tavian.
Warden: Melody of the Undergrowth is an Action-Adventure Video Game by Cardboard Keep.
Advertisement:

One day, the Emperor Magulus and his son, prince Tavian, are carving a way through a forest on their journey to town. While traveling, they're beset upon by Golems. Magulus distracts them so Tavian can run off, but Tavian ends up falling into a river when the bridge he's on breaks, and is washed downstream.

When Tavian comes to, night has fallen, and he has no idea where his father is. With no other options, he decides to light a fire and take a nap. In his dream, he visits Nyona, the guardian spirit of the forest. Nyona informs Tavian that the forest is going out of control because she's been bound in chains and can't help. She informs Tavian that he needs to break her bindings and free her, whereupon she can restore harmony to the forest. So, Tavian begins his quest.

The game was released on April 8th, 2016 for PC on Steam and the Humble Store.

Warden: Melody of the Undergrowth contains examples of: