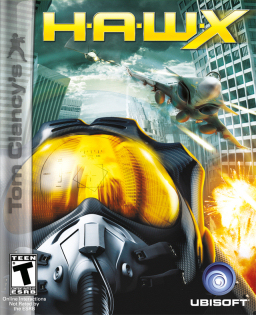 Though I Fly Through The Valley of Death, I Shall Fear No Evil.
For I am at 80,000 Feet and Climbing.
— SR-71 USAF Base (Kadena, Japan)
Advertisement:

H.A.W.X. is an arcade flight combat game and part of the Tom Clancy brand. The story is set in the near future where Private Military Contractors are recognized as lawful combatants by the fictional Reykjavik Accords.

The protagonist is a Captain in the U.S. Air Force named David Crenshaw, who is part of the titular High Altitude Warfare Xperimental Squadron. He begins the game on his last day on the job, supporting covert operations being conducted south of America's border (Ghost Recon fans should recognize the mission as being a part of the Advanced Warfighter 2 storyline). Afterwards, the H.A.W.X. squadron is deactivated and subsequently headhunted, along with Crenshaw, by Artemis Global Security. The team quickly proves themselves to be one of Artemis' most valuable assets and helps secure them a place as one of the richest and most powerful PMCs in the world. Life has never been so good. Right?

Well, who are we kidding? Life in fiction never stays good.

After a war breaks out between U.S.-friendly Brazil and "Las Trinidad" (an anti-American alliance of South American countries), U.S. involvement within the conflict hurts Artemis's bottom line, causing them to backstab the U.S, side with Las Trinidad, and launch a full scale invasion of the U.S. This, of course, didn't bode well with the patriotic ex-Air Force pilots, who defect back to the U.S. and have their old HAWX squadron reactivated as a result. Now they must work together with U.S. military forces to beat back the invading PMC military.

The game has the player flying various real-world aircraft on their missions and employs a semi-realistic simulation of aerial combat. Under normal conditions, the game prevents the plane from stalling and limits its maneuverability, but this limiter can be disengaged to allow the player to perform all sorts of funky post-stall maneuvers. The other aspects of the game are more arcade-like; planes carry mountains upon mountains of missiles, even on the highest difficulty levels, and there is no need to keep track of fuel or the effects of physics on the human body.

If this is all starting to sound familiar to you, chances are you have played Ace Combat before, and you would be right. The gameplay is almost identical to that of the Ace Combat games and there is a degree of overlap between the fanbases of the two. On the other hand, both H.A.W.X. games are all multiplatform, including PC releases, whereas with the exception of Ace Combat: Assault Horizon and Ace Combat 7: Skies Unknown, every installment in Ace Combat has been exclusive to a single console.

To date, there is only one other installment in the series, H.A.W.X. 2, which is set more or less concurrently to the events of Ghost Recon: Future Soldier, during a major coup in Russia in 2024 (unrelated to the 2008 coup that was part of the original Ghost Recon story), although that game's Troubled Production means it came out several years later and its plot bares only a passing resemblance to that of H.A.W.X. 2.